Reason and Measurement, Suits and Ties

Versailles, France - On November 16, 2018, the General Conference on Weights and Measures, the governing body of the International Bureau of Weights and Measures, will hold a gathering at the Palais des Congrès in Versailles, France, to celebrate its historic vote to adopt a new definition of the Système International d’Unités (SI)—the measurement system used by virtually the entire world—based on fixed numerical values of seven fundamental constants of physics. That will be one day before my 57th birthday, and 21 years, nearly to the day, since I began my career at NIST.

The event is a big deal for me. Over a third of my life has been spent in the scientific pursuit of measuring force and mass in terms of fundamental constants. Most recently, I had the privilege of managing the NIST effort to measure the Planck constant and had a front-row seat as the world worked and cooperated to prove that the unit of mass—the kilogram—is finally ready to join the meter in being based on the value of immutable, fundamental constants.

I have tickets to attend the event with my wife, but my health of late has been erratic, so we will see if I am fit to travel when the momentous occasion arrives. Not to fret, there will be a webcast. But I fear that won’t be quite the same thing as sitting in grand Versailles with my wife, my NIST friends, and my international colleagues, listening to Nobel laureates extoll the virtues of our shared accomplishment. Or taking time out to visit Musée d'Orsay with my wife on my birthday the next day, as a quiet, personal celebration of our shared sacrifices in this venture. C'est la vie. Or, to quote comedian Steven Wright, “You can’t have everything. Where would you put it?”

Over the past 20 years, I have profoundly enjoyed the experience of making instruments that measured the Planck constant and instruments that have calibrated forces barely perceptible, such as the momentum of a stream of photons bouncing off a mirror. I even led a team of very talented people who ruptured the bond of a chain of single atoms of gold using only the speed of light, the ticking of an atom’s electrons, and the Planck constant as a guide. These experiences, and more importantly the people around the globe with whom I’ve shared them, will be in my thoughts, whether I'm celebrating in Paris or quietly watching events unfold on my laptop at home, giving my heart a much-needed break from the stress of managing the final measurements that certainly were a major contribution to the present hubbub.

It has been a grand experience. More than a kid from a small town in Iowa ever hoped for. And an enterprise of far greater significance than I ever imagined I’d be a part of. Perhaps I’ll even wear a suit and tie on the big day. Even if watching from home. Because to me, in a world where there is so little that can be agreed upon, it is astonishing, and worthy of a certain formality, that there is broad international consensus on something so basic, so woven into the fabric of global commerce and the scientific enterprise. It really does deserve a suit and tie.

The SI, as I’ve come to appreciate it, is perhaps humanity’s most grand and successful experiment in cooperation. It is a manifestation of ideals that place priority on a shared common good. Something I achingly yearn for in the world. It’s all for the good, in my opinion, that we humans seem predisposed to want to share our experiences with each other. Predisposed to want to exchange objects and ideas. And as a member of the global scientific community, I believe we all have a stake in using reason and measurement to understand our world and each other. Collectively. We can sort things out. We sorted out measurement.

Humans realized some 230 years ago that perhaps the greatest obstacle to the exchange of objects and ideas, to the pursuit of happiness and progress, to sorting things out, was the lack of a common, universal basis of measurement. Obvious, right? So naturally, a collection of countries, often at war or otherwise at odds with each other, would in the late 1700s cook up the idea of a universal system of measurement. And only 100 years later, in 1875, 17 of these nations would gather in Paris, draft a treaty, and voila, the Meter Convention would be born— a treaty among nations that established an international system of units and an international bureaucracy for its governance. It’s been off and running, evolving and growing, ever since.

Which leaves me to ponder: Why has the SI worked so spectacularly well?

In truth, I don’t know why it works. But if I had to venture a guess, I would say that it is because humans are social animals that seem to have an innate sense of fairness, and yet a love of comparing themselves to one another. The combination of these impulses motivates a keen interest in an objective frame of reference.

Perhaps it is as simple as the fact that the basic idea is quite appealing: that there can be something in a world of transience, belonging to no one, yet available to all, that can serve as a reference. A guide. “For all times, for all people” was the motto of the metric system back in 1790. It began with a pair of objects, a meter bar and a kilogram, and has evolved with our knowledge of the world. On Nov. 16 we’ll celebrate the next step for this grand system, embracing the notion that, whether we really know them or not, the general laws governing phenomena of the universe are what are truly constant, and that a more ideal system of units is one based on the constants occurring in these natural laws.

Why is this so powerful and meaningful to me? I tend to believe that the essence of humanity is our ability to reason. But I recognize, painfully so, that reason is both inspired and corrupted by our emotions. In the measurement business, we call it bias. We must always test our reasoning. We must balance our rational and irrational natures. Science is reason with measurement, helping us to test our conceptions of reality, against reality. Cogito, ergo sum (I think, therefore I am), perhaps, but reason must be confirmed or refuted by observation, preferably by multiple people using multiple means. This process works even when emotions give rise to competition between ideas. When antagonists grudgingly agree, using fair, common measures, we know we are on to something. That is how we established the values of the constants.

Which is certainly worthy of a suit and tie. 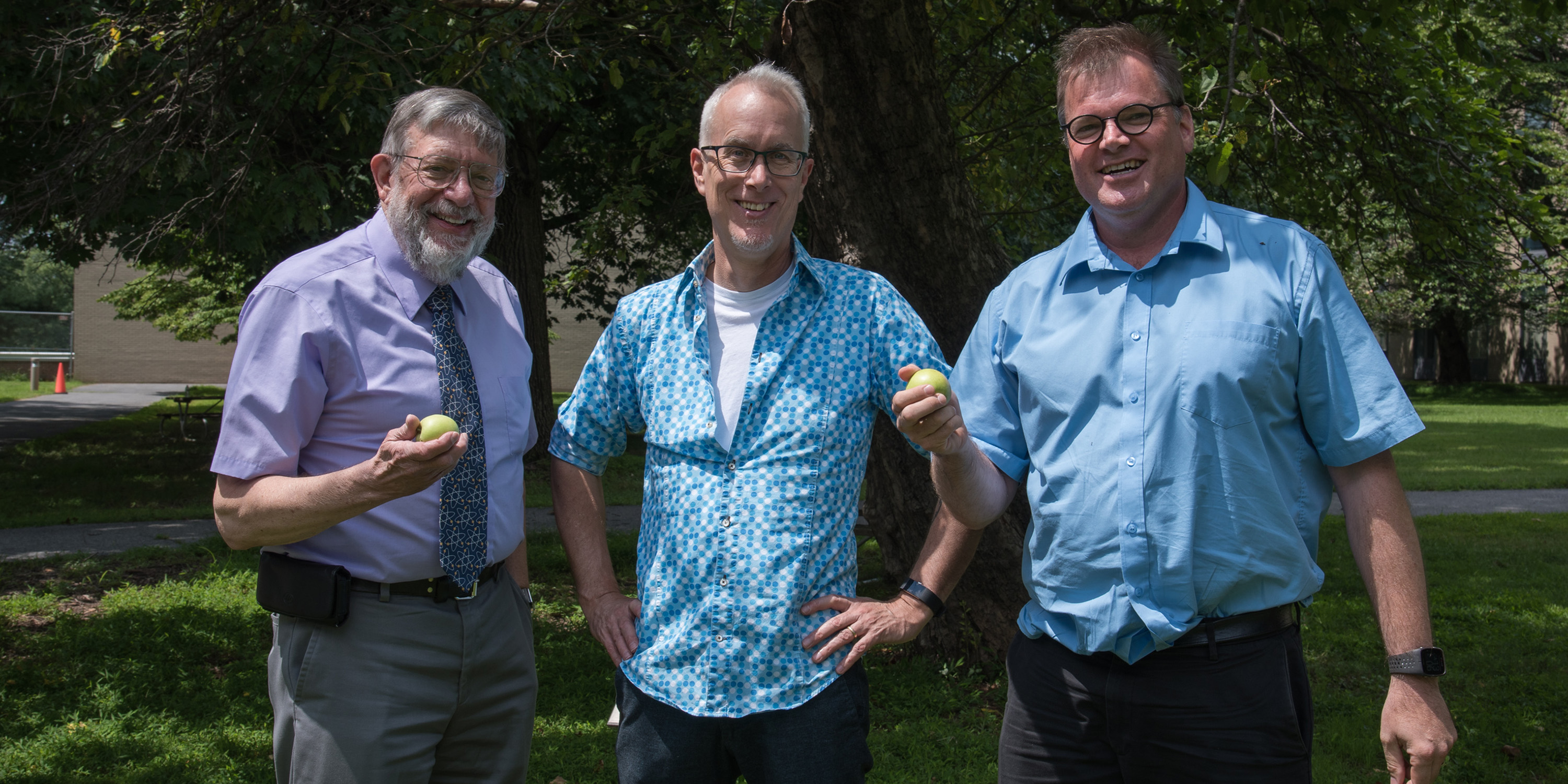 Me with my fellow NISTers Bill Phillips (left) and Stephan Schlamminger (right) and a couple apples purloined from NIST's Newton apple tree. Bill helped design NIST's second watt balance (while surreptitiously investigating some crazy notion he had about trapping atoms using light). Stephan has made major contributions to not one, but two, fundamental constants, having successfully measured the Newtonian gravitational constant in his student and postdoctoral days, and the Planck constant here at NIST.