Researchers at the University California, Merced are developing an aluminum solar mini-channel collector that is showing promise. Now the UC Merced campus is interested in installing these collectors as it pursues the goal of zero-net-energy by 2020.

The “channels” found in mini-channel solar water heating panels have a much smaller “hydraulic diameter” (the area that water flows through in a pipe) than the copper tubes found in traditional solar water heating panels. This smaller diameter allows for a much greater number of tubes or “channels” to be fitted on to a similar sized solar panel. The increased number of channels translates to an increase in the surface area that can absorb solar energy and result in an increase in the amount of solar energy that can be absorbed by water or other fluids. Because of the significant increase in solar energy absorbed, researchers were able to use aluminum (a metal much less expensive than the copper used in traditional solar water heating panels) as the material to build the solar panels.

Mini-channel technology has been successfully utilized in the automotive, air conditioning, and electronics cooling industries due to improved performance and compact size compared to round-tube heat exchangers. The transition to mini-channel technology, however, has not taken place yet in the solar industry. 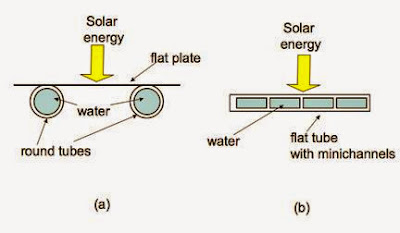 For more information about this project and other innovations funded by the Energy Commission please see the recently released Natural Gas Research and Development 2014 Annual Report.