"We are really a crucial element in making the fundamental change from a carbon intensive economy to one that is on the side of nature, and therefore sustainable," said Governor Brown. "Individual jurisdictions – cities, states, provinces and regions – can be a coalition of the willing." 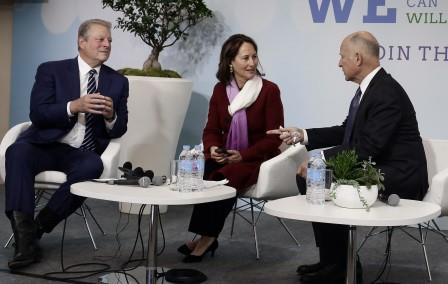 Governor Brown then joined U.S. Energy Secretary Ernest Moniz to announce that in June 2016, San Francisco, California will host the seventh Clean Energy Ministerial (CEM7), an annual meeting of energy ministers and other high-level delegates from the 23 countries and the European Commission.

"I can think of no better place than California to play host to the world's clean energy leaders," said Governor Brown.

The Clean Energy Ministerial announcement came during an event organized by the U.S. Department of Energy at the U.S. Center in the blue zone of Le Bourget Conference Center. Following remarks, the Governor and Secretary joined a panel discussion with Saudi Arabia’s Minister of Petroleum and Mineral Resources, Sweden’s Minister of Energy and Denmark’s Minister of Energy, Utilities and Climate. The Clean Energy Ministerial was launched in 2010 with the goal of accelerating the global transition to clean energy.

“Holding CEM7 in San Francisco is an exciting opportunity for the United States to showcase one of America’s prime technology innovation ecosystems that is providing real-world solutions to combat climate change and drive the clean energy revolution in the U.S. and around the world,” said Secretary Moniz. “CEM is a key forum following COP-21 for energy ministers and other distinguished leaders to gather and implement the clean energy goals set forth in Paris.” 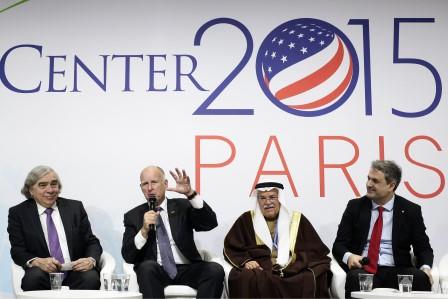 Later, Governor Brown joined Vermont Governor Peter Shumlin and Quebec Premier Philippe Couillard to discuss regional efforts to deploy and advance zero-emission vehicles and infrastructure, including the new target established by these states and other North American and European governments to make all new passenger vehicles sold in their jurisdictions zero-emission by 2050. 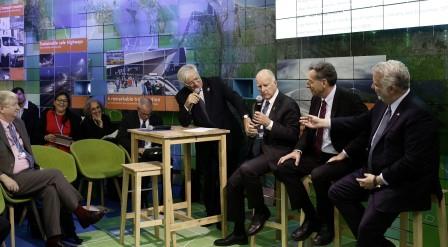 The Governor then gave keynote remarks regarding California's push to dramatically reduce short-lived climate pollutants at the opening of a high-level assembly of more than two dozen environment ministers from countries around the world – including the U.S. Environmental Protection Agency Administrator Gina McCarthy – organized by the Climate and Clean Air Coalition and the United Nations Environment Programme (UNEP). 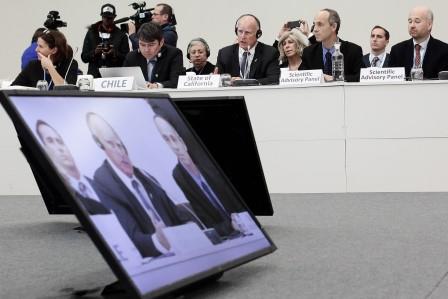 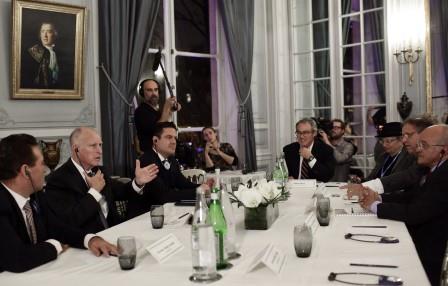 Governor Brown meets with Governors from around the world to discuss subnational climate innovation. 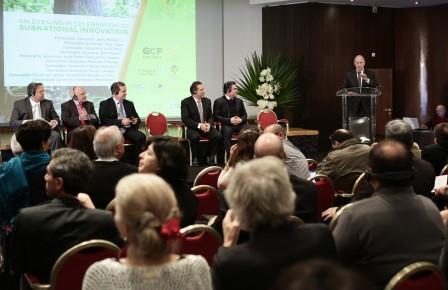 On Sunday, Governor Brown and U.S. Ambassador to France Jane D. Hartley welcomed 15 new signatories to the Under 2 MOU climate agreement at a signing ceremony hosted at the U.S. Ambassador's Residence in Paris. With the addition of Sunday's signatories – including South Australia, the first Australian state to join the Under 2 MOU and Rhode Island, the ninth American state to sign on – a total of 80 jurisdictions representing 22 countries and six continents have now signed or endorsed the agreement, together representing more than 614 million people and $18.6 trillion in GDP, equivalent to nearly a quarter of the global economy. Governor Brown also on Sunday discussed California's nation-leading action on renewable energy on a panel focused on clean energy initiatives by national and subnational governments at the "RE-Energizing the Future" conference organized by the European Commission, International Renewable Energy Agency, Syndicate for Renewable Energy of France and others and later delivered keynote remarks at one of the COP21's largest "side events," the "2015 Global Landscapes Forum," following a plenary session featuring international scientists and government leaders seeking to bridge the divide between climate research and policy making – a longstanding priority in California.

Governor Brown is attending the UN Climate Change Conference at the invitation of UNFCCC Executive Secretary Christiana Figueres – the United Nations' top climate change official – and France's Minister of Foreign Affairs and International Development Laurent Fabius – the president of the COP21. Tomorrow is the Governor's final full day at the conference