Washington, DC - Pretending to be someone people trust is what scammers do. They may claim to be a well-known company or a beloved family member, but data from the FTC’s Consumer Sentinel Network suggest that pretending to be the government may be scammers’ favorite ruse. Since 2014, the FTC has gotten nearly 1.3 million reports about government imposters. That’s far more than any other type of fraud reported in the same timeframe. This spring, monthly reports of government imposter scams reached the highest levels we have on record.

The vast majority of people who report this type of scam say it started with a phone call, and these callers have their mind games down pat. Government impersonators can create a sense of urgent fear, telling you to send money right away or provide your social security number to avoid arrest or some other trouble. Or they can play the good guy, promising to help you get some free benefit like a grant or prize, or even a back brace. Scammers like to make the situation so immediate that you can’t stop to check it out.

These scams can be extremely lucrative. Reported losses to government imposter scams add up to more than $450 million since 2014. Only 6% of people who report government imposters say they lost money. But when people do lose money, it’s a lot: the median individual reported loss is $960. People ages 20 to 59 report losing money to these scams at higher rates than people 60 and over, but median individual reported losses increase with age. People 80 and over report a median loss of $2,700.

Gift cards are now the payment method of choice for these scammers. Most people who tell us they lost money to a government imposter say they gave the scammer the PIN number on the back of gift cards like Google Play or iTunes cards.6 Wire transfers come in a distant second to gift cards as a payment method. But with both methods, the scammer gets quick cash while staying anonymous, and the money is simply gone.

The top government imposters reported so far in 2019 have both familiar and new faces. The FTC reported recently about the dramatic surge in Social Security imposters, but IRS imposters are still hanging on in the top five. Scammers use “bureau” or “administration” in their name to make their government grant offers sound official, and use generic names like “sheriff’s office” to suggest a hefty law enforcement presence. Government imposters will adapt quickly to find new ways to get your money. Lots of government agencies have been impersonated, including the FTC. The scammer’s pitch is even more convincing when they fake the number on your caller ID so it shows the name or phone number of a real government agency. It’s illegal to fake the number on caller ID, but scammers know it helps convince people that the caller really is with the government. 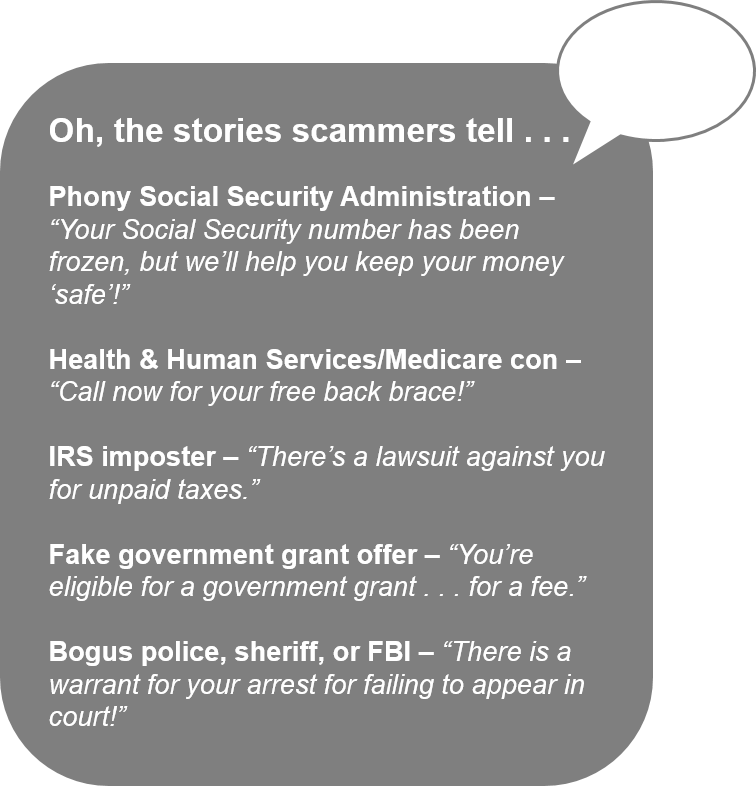 So what can you do to protect yourself against imposters when their stories keep changing?

Check with the real agency. Look up their number. Call them to find out if they’re trying to reach you – and why.