Washington, DC - Where do entrepreneurs go if they’re long on ideas, but short on capital? In their short history, crowdfunding platforms have often been the financial sparkplug that ignites the engine of innovation. But some campaigners promote zealously and deliver zilch. According to the FTC, a company raised over $800,000 in four crowdfunding campaigns for a high-tech backpack and other items, but used a large portion of the money on personal expenses. 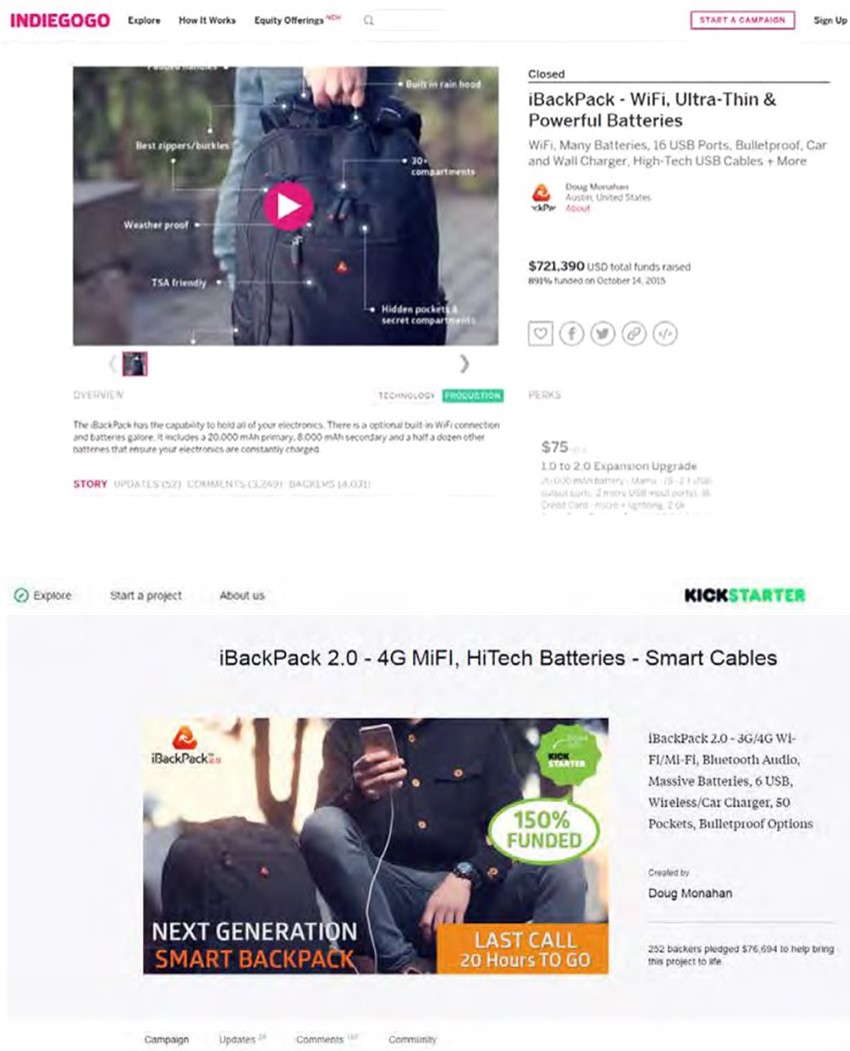 Defendants iBackPack of Texas and CEO Douglas Monahan claimed on popular crowdfunding platforms they would use the funds primarily to develop, produce, and deliver certain products – including a backpack that incorporated tech features. For example, on Indiegogo, the defendants claimed as early as 2015 that consumers who contributed $169 would get the iBackPack 1.0 Power Pack, which features batteries, cables, and a Bluetooth speaker.

The March 2016 delivery date came and went without consumers getting the promised backpacks. But that same month, the defendants launched a campaign on Kickstarter to produce and distribute the iBackPack 2.0 – an updated version of the still undelivered original iBackPack. Consumers who pledged $299 on Kickstarter were promised the WiFi version of the backpack with an estimated delivery date of September 2016. As months went by, the defendants told consumers they were “busy finalizing all the various components of the iBackPack” and even posted photos purporting to show the product being manufactured in China.

But according to the complaint, the defendants were telling one story to contributors and another to crowdfunding platforms. Trying to stave off dissatisfied consumers, the defendants extended the estimated delivery date to December 2016 and then delayed it again to the fall of 2017. At the same time, in an effort to avoid losing their fundraising privileges, the defendants allegedly told Indiegogo’s staff they were in the “full production and shipping phase” and had already shipped the iBackPack to “hundreds if not thousands” of contributors.

You’ll want to read the complaint for details, but the FTC alleges the defendants made similar misrepresentations in Indiegogo campaigns for their MOJO tech shoulder bag and POW Smart Cable. According to the lawsuit, the estimated delivery dates for those products came and went with nothing in consumers’ hands, despite the defendants’ claims that the products were “FINALLY on their way here,” that consumers would get them “within the next 6 weeks or so,” and that they’re “already in the air from China.” The defendants allegedly told Indiegogo’s staff: “MOJO BAG IS DONE/FINISHED/SHIPPED/OVER WITH” and “POW CABLES ARE DONE/FINISHED/NEARLY ALL SHIPPED/LAST ONES GOING OUT.” Indiegogo ultimately suspended Defendants’ fundraising privileges in November 2016.

Hundreds of consumers complained about the defendants’ failure to deliver the promised items. According to the FTC, in some cases, defendant Monahan responded with threats, including telling one consumer he knew where the consumer lived and telling another person he would sue for libel and slander. Only a small number of total contributors have received requested refunds.

So where did the money go? According to the complaint:

Defendants have used a large share of contributions for Defendant Monahan’s own personal purposes, such as making bitcoin purchases and ATM withdrawals and paying off personal credit cards; for marketing efforts to raise additional funds from consumers; and for other business ventures. Defendants used a small fraction of the funds to send individual items – such as charging cables – to some consumers in order to string Indiegogo and consumers along while Defendants raised additional funds, but have not provided a single completed product to any consumer who contributed to the campaigns.

The case is pending in federal court in Texas, but even at this early stage, it serves as a reminder for businesses to honor established consumer protection principles on crowdfunding platforms. That includes the FTC Act’s prohibition on false or deceptive claims, which applies to promises made on these platforms. Whether consumers are putting money toward a tech backpack or something else, they shouldn’t have to shoulder the burden of fundraisers’ allegedly illegal conduct.