Fredericksburg, Virginia - Whether it’s the effort to redefine the kilogram or researching the Harry Potter realm of quantum mechanics where things can somehow be in two or more places at one time, quite a bit of the science carried out at the National Institute of Standards and Technology (NIST) can be hard for the average person on the street to understand or relate to.

But at the Unmanned Aerial System (UAS) Flight and Payload Challenge, which NIST held May 21 to 24, 2018, the question being explored was as simple as can be: Can a vertical-takeoff drone hoist 20 pounds (9 kilograms) of communications equipment into the air and hover in place for two hours? And, by the way, the drone itself can’t weigh more than 35 lb (15.9 kg).

It was, in other words, a matter of schlepping.

“It’s not nano, it’s not quantum,” says mechanical engineer Kamel Saidi about the drone breakthrough being attempted. Saidi was the technical lead for the Flight and Payload Challenge, which was carried out by NIST’s Engineering Laboratory for the Public Safety Communications Research Division (PSCR) in NIST’s Communications Technology Laboratory (CTL). The goal of the challenge was to stimulate improvements in the lifting capability of drones as a means to provide an affordable new way to protect public safety.

Lifting a 20 lb weight for two hours is a bigger deal that one might suspect. For commercially available vertical-takeoff drones, hoisting such a payload even for 20 minutes would be a good performance, says Saidi.

The challenge, therefore, was to do what has never been done before. The grand prize was $50,000. The arena was an airfield south of Fredericksburg, Virginia.

The ultimate purpose of the drone challenge is a matter of life or death.

The scenario proposed to the competitors was this: A person has been reported lost in a mountainous forest, where normal cell phones and first-responder communications devices won’t function. The competitor's drone would need to lift a “cellular network in a box” into the air, where it would enable rescue personnel on the ground to communicate with each other.

This application could also enable communications in other kinds of emergency situations, such as a forest fire in the mountains. Aerial drones (as opposed to hot-air balloons) are ideally suited for this because one can quickly direct a drone to a different location, and a drone can hover in place without being blown around by the wind.

This application could also enable communications in other kinds of emergency situations, such as a forest fire in the mountains. Aerial drones (as opposed to hot-air balloons) are ideally suited for this because one can quickly direct a drone to a different location, and a drone can hover in place without being blown around by the wind.

“The competition result is promising for the prospect of being able to fly for a long time with a payload,” says Saidi. “Obviously the drones need improvement, and both teams that competed believe they can make the necessary improvements so that their drones fly for much, much longer than they were able to demonstrate. I think it’s a good step in the right direction. That’s why we’re hoping that we might have a second challenge and fly for more than two hours at a time without landing.”

“At the conclusion of a challenge, the question always comes up: What happens next?” says Craig Connelly, PSCR’s prize and challenge specialist.

“Right now, we are collecting information from the contestants, judges, and technical subject-matter experts to assess whether we will launch a second iteration of the challenge,” Connelly says. “It’s clear that the contestant teams and the first responders supporting the challenge are eager to see more drone designs, longer flight times, and other innovative technologies to support specialized flight missions in more challenging scenarios."

Speculating about the future, Terese Manley, PSCR’s open-innovation outreach manager, believes that future improvements in battery technology will be a game-changer for drones designed to hover with communications equipment. “The power density in current batteries is a limitation at this point, just as it is for electric cars,” she says.

Hydrogen fuel cells, which could be lighter than gasoline generators or batteries, also look promising as a future power source for these drones, says Saidi. 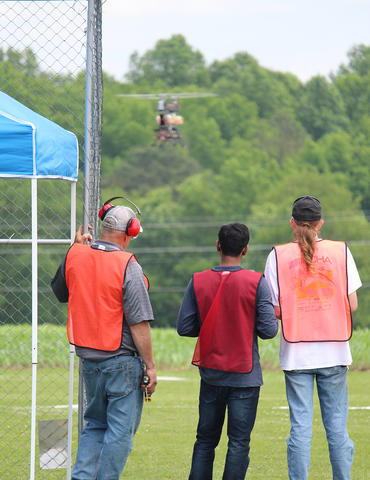 Members of a competitor's ground crew watch piloting their entry.

NIST is uniquely positioned to do this work. The agency not only has a leading communications research laboratory—CTL—but NIST’s Engineering Laboratory is the home of one of the world’s leading robot testing facilities, which has experience in the testing and evaluation of aerial drones.

“There’s no way we could’ve done this without Kam [Saidi] and his team at the NIST Robotics Test Facility,” says Connelly. “Their standardized testing and assessment protocols, which they’ve developed over several years, have been instrumental in creating the assessment framework that we used in the Flight and Payload Challenge.”

Congress has tasked NIST’s Communications Technology Laboratory with establishing an R&D program to support the development and deployment of a nationwide public safety broadband communications network, and with advancing a range of public-safety communications capabilities. The Flight and Payload Challenge was funded by the federal government’s 2016 auction of public communications spectrum to broadcasters.

PSCR’s mandate is to stimulate early-stage technology development and to provide the “proof of concept” for new public-safety technologies—such as drones that enable life-saving communication for first responders.

Now that’s something that the average person on the street can relate to.