COP23 Special Advisor for States and Regions Governor Brown and Washington Governor Jay Inslee, representing the U.S. Climate Alliance, met with Mexico’s Undersecretary of Planning and Environmental Policy in the Ministry of the Environment and Natural Resources Rodolfo Lacy Tamayo and Canada’s Minister of Environment and Climate Change Catherine McKenna at the Canadian delegation’s office located directly across from the United States’ office in COP23’s Bula Zone. Meeting participants discussed ongoing negotiations at COP23 and reaffirmed the commitment of Canada, Mexico and members of the U.S. Climate Alliance to climate action and further collaboration across North America. 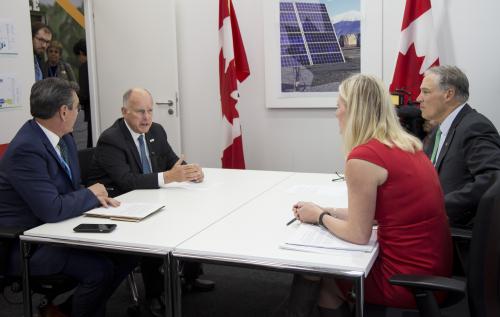 At the conclusion of the meeting, the parties issued the following joint statement:

“Canada, Mexico, and the U.S. Climate Alliance, a bipartisan coalition of 15 U.S. Governors, stand together in a strong commitment to combat climate change and support clean growth across North America. We recognize that a global climate challenge demands working together.

"We agreed today to strengthen our climate initiatives through a new North American Climate Leadership Dialogue. We will share progress on these goals at the 2018 Global Climate Action Summit to be hosted by California this September.

Governor Brown reaffirmed this commitment later, on a panel hosted by the Climate Action Reserve with representatives from Canada and Mexico, including Ontario Minister of the Environment and Climate Change Chris Ballard, British Columbia Minister of Environment and Climate Change Strategy George Heyman and Mexico’s Undersecretary of Planning and Environmental Policy in the Ministry of the Environment and Natural Resources Rodolfo Lacy Tamayo. Earlier this year, Mexico and Canada joined the Under2 Coalition, the global pact of cities, states and countries committed to limiting the increase in global average temperature to below 2 degrees Celsius, the level of potentially catastrophic consequences.

Governor Brown then gave remarks ahead of a panel discussion hosted by Sustainable Energy for All, the Global Covenant of Mayors and the Partnership on Sustainable, Low Carbon Transport on how cities can deploy new technology and innovative policies to decarbonize and reduce emissions in the transportation and energy sectors.

The Governor also previewed the Global Climate Action Summit, which California will host in San Francisco in September 2018. This event will showcase the surge of climate action around the world – and make the case that even more must be done. The Summit will also help strengthen the push for greater emissions reduction targets at COP 24 in December 2018.

On his final day at COP23 tomorrow, Governor Brown will deliver the keynote address at a cap-and-trade forum organized by the People's Republic of China, speak at the UN Environment Programme’s Sustainable Innovation Forum and the Zero-Emission Vehicle Alliance’s ZEV Infrastructure Symposium, participate in a panel discussion hosted by the World Wildlife Foundation and join environment officials from the German Federal Government and Under2 Coalition co-founder Baden-Württemberg to welcome new Under2 Coalition signatories at a signing ceremony.

Last week, in Bonn, Governor Brown joined fellow America's Pledge co-founder Michael Bloomberg to reaffirm the commitment of America's states, cities and businesses to the Paris Agreement and welcomed Virginia to the Under2 Coalition. In Oslo, Governor Brown met with Norway's Prime Minister Erna Solberg and convened a first-of-its-kind meeting with representatives of the world's leading independent national academies of science to review climate impacts and discuss how scientists and policymakers can more effectively translate research findings into meaningful action. In Brussels, Governor Brown delivered opening remarks at a high-level conference on clean energy organized by the European Parliament and European Commission, met with the president of the European Parliament and the European Union's top representatives at COP23, joined members of the European Parliament's top climate and environmental committee and the leaders of the Parliament's political parties for an extensive discussion on opportunities for further collaboration on climate action, and highlighted California's local and global efforts to fight climate change at an event organized by the German Marshall Fund. In Stuttgart, the Governor met with Under2 Coalition co-founder Baden-Württemberg's Minister-President and delivered remarks before the state parliament. Governor Brown also delivered keynote remarks at a symposium on climate change hosted by the Pontifical Academy of Sciences at the Vatican.