Bonn, Germany - In his first day at the United Nations Climate Change Conference (COP23), Governor Edmund G. Brown Jr., the conference's Special Advisor for States and Regions, joined Michael R. Bloomberg, the United Nations Secretary-General’s Special Envoy for Cities and Climate Change, to reaffirm the commitment of America's states, cities and businesses to the Paris Agreement and later welcomed Virginia to the Under2 Coalition at a signing ceremony with Governor Terry McAuliffe.

"When cities and states combine together and then join with powerful corporations, that's how we get stuff done," said Governor Brown at today's event at the U.S. Climate Action Pavilion, a purpose-built exhibition space sponsored by U.S. non-federal leaders at COP23. "We're here, we're in and we're not going away."

Governor Brown and Bloomberg joined forces to launch America's Pledge on climate change in July to help compile and quantify the actions of states, cities and businesses to drive down their greenhouse gas emissions consistent with the goals of the Paris Agreement. Ahead of today's event, the America's Pledge report was submitted to the United Nations detailing, for the first time to the international community, the scope and scale of non-federal climate action in the United States following the Trump administration’s decision to withdraw from the Paris Agreement. Cities, states and businesses representing more than half the U.S. economy and population have declared their support for the Paris Agreement, including more than 2,300 signatories to the “We Are Still In” declaration. 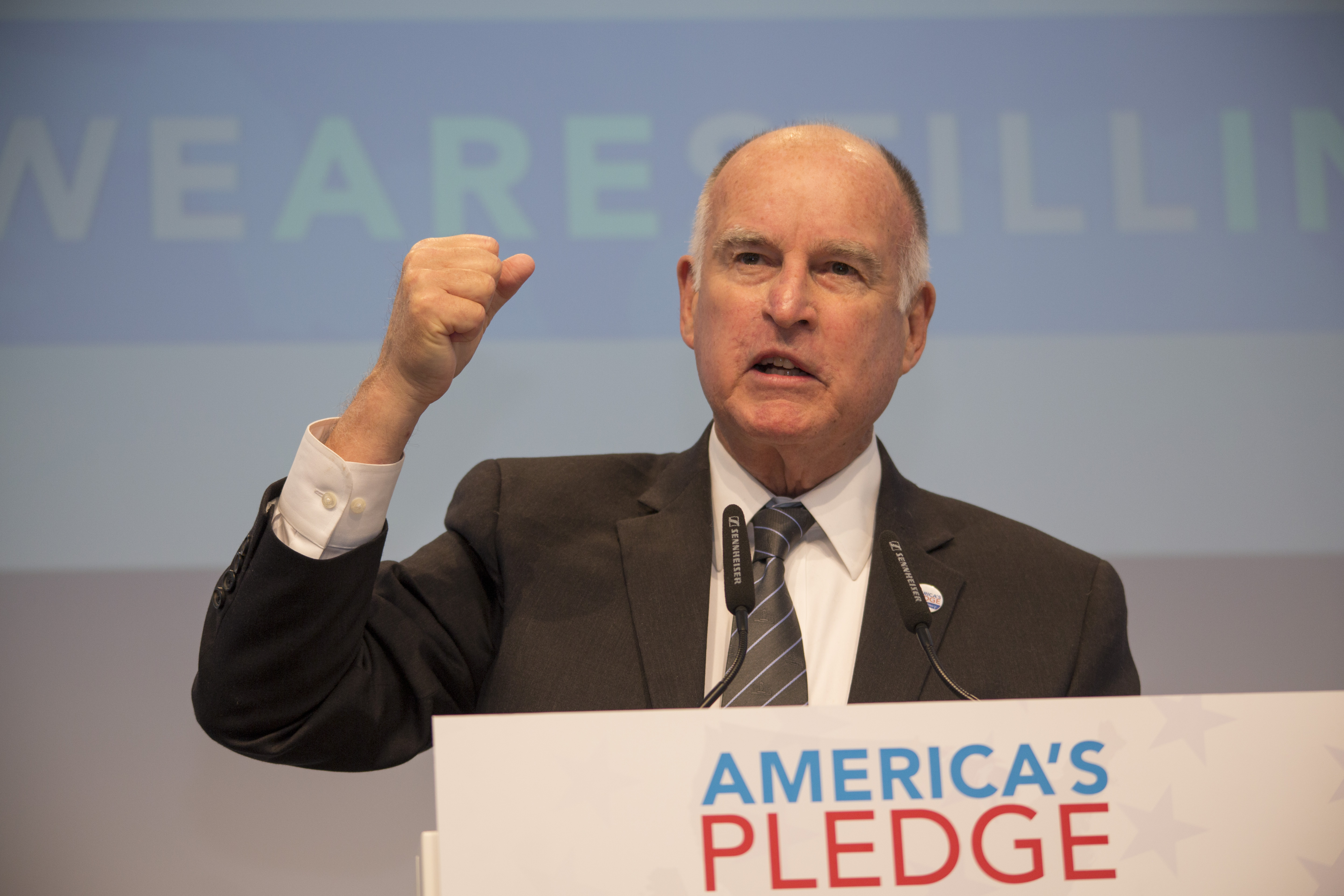 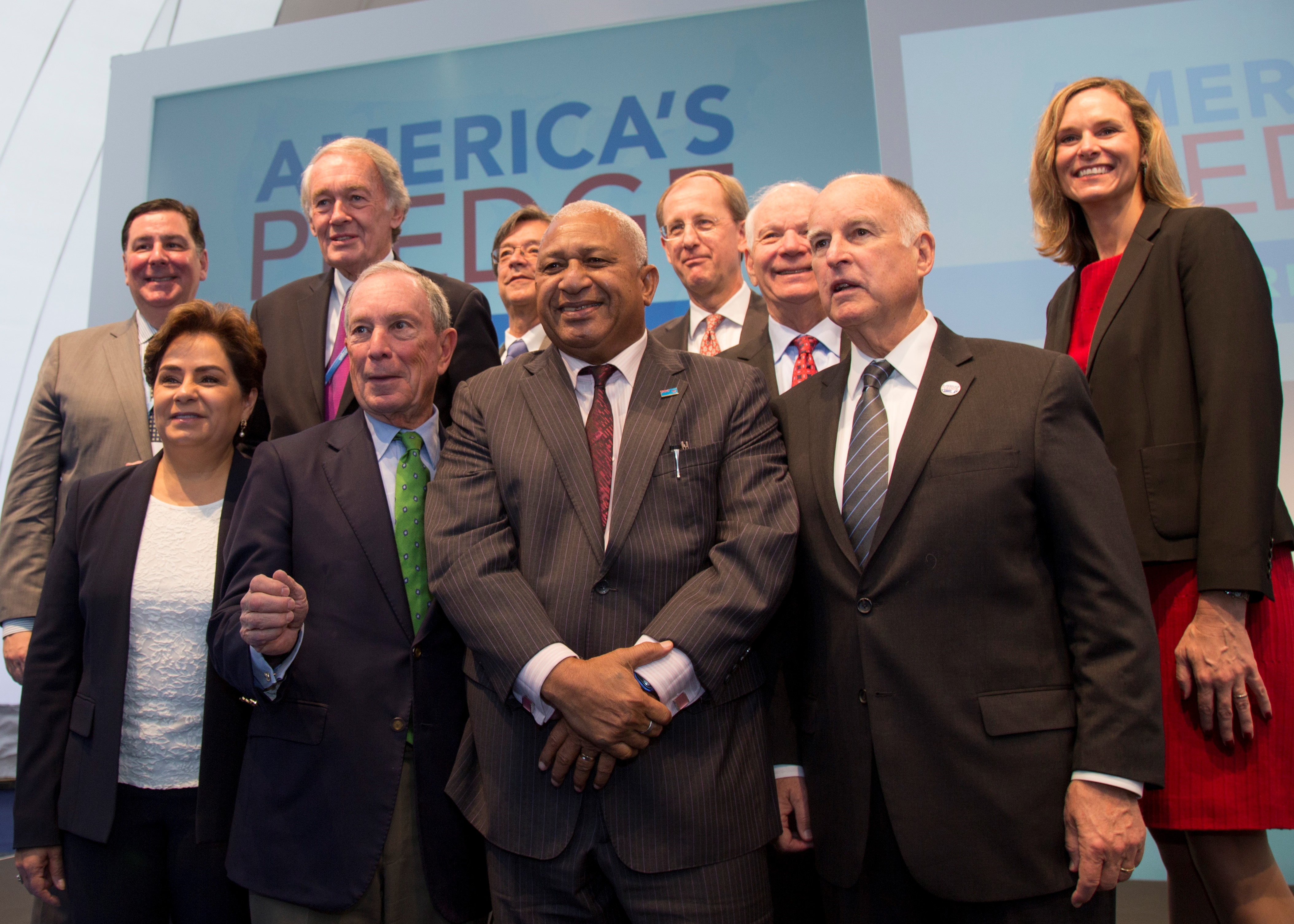 “The group of American cities, states, and businesses who remain committed to the Paris Agreement represents a bigger economy than any nation outside the U.S. and China,” said Bloomberg. “Together they are helping deliver on the promise of the agreement and ensuring the U.S. remains a global leader in the fight against climate change. In Paris, the U.S. pledged to measure and report our progress reducing emissions alongside every other nation. Through America’s Pledge, we’re doing just that, and we’re going to continue to uphold our end of the deal, with or without Washington.”

“If the challenge of climate change is to be solved and the opportunities of a low carbon transition harvested we need all sectors of society in all nations fully on board,” said UNFCCC Executive Secretary Espinosa. “Cities, states, regions and territories have, along with business and civil society, been an inspiration before, during, at and following Paris. Here I want to pay tribute to Jerry Brown, California’s Governor, UN Special Envoy Michael Bloomberg and all the states and cities of the USA who have been aligning their pledges and actions with the Paris Climate Change Agreement. You are part of an unstoppable movement that is stretching North and South, East and West. With greater speed, ever higher ambition and by joining hands with all actors world-wide, we can together reach our shared goals.”

"To achieve the goals of the Paris Agreement, we are helping to build a Grand Coalition to accelerate climate action across all nations and at every level of society,” said COP23 President Prime Minister Bainimarama. “So I am delighted to welcome the commitments that have been made through America’s Pledge from members of that coalition in the US among the non-state actors such as governors and mayors. This imaginative initiative by Governor Brown and Michael Bloomberg shows that the campaign for climate action in America remains strong.  I also hope that it is a model that can be followed elsewhere in the world as we bring everyone together to pursue a more ambitious response to the challenge of climate change"

Later in the day, Governor Brown joined Virginia Governor McAuliffe at an Under2 Coalition signing ceremony. With the addition of Virginia, the Under2 Coalition now includes 189 cities, states and countries collectively representing more than 1.2 billion people and $29.4 trillion GDP – equivalent to over 16 percent of the global population and 39 percent of the global economy.

“Virginia is driving clean energy investment and carbon reduction despite the President’s decision to withdraw from the Paris Climate Agreement,” said Governor McAuliffe. “In the absence of leadership in Washington, Virginia is stepping up to sign the Under2 Memorandum of Understanding. Virginia will meet the challenge of climate change head on, and we will do so in a way that grows our clean energy sector and supports our new Virginia economy.”

"It is great to see another US state ready and willing to reduce their greenhouse gas emissions by committing to the Under2 Coalition," said The Climate Group CEO Helen Clarkson. "This is another example of the strong leadership on climate action that we’ve seen from US states over the past few months, despite the position of the federal government. We hope that more sub-national governments around the world take up such ambitious climate action.”

Members of the coalition, formed in 2015 ahead of COP21, pledge to limit greenhouse gas emissions to 2 tons per capita or 80 to 95 percent below 1990 levels by 2050, and support the Paris Agreement’s goal of keeping the increase in global average temperature to below 2 degrees Celsius, the level of potentially catastrophic consequences. 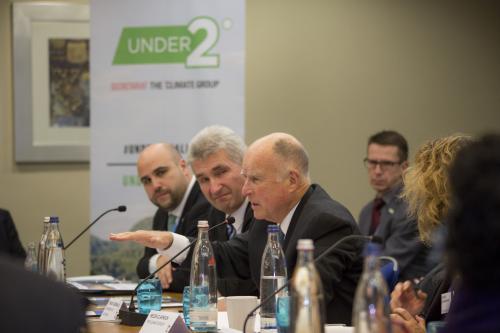 Governor Brown meets with officials from Under2 Coalition member governments. 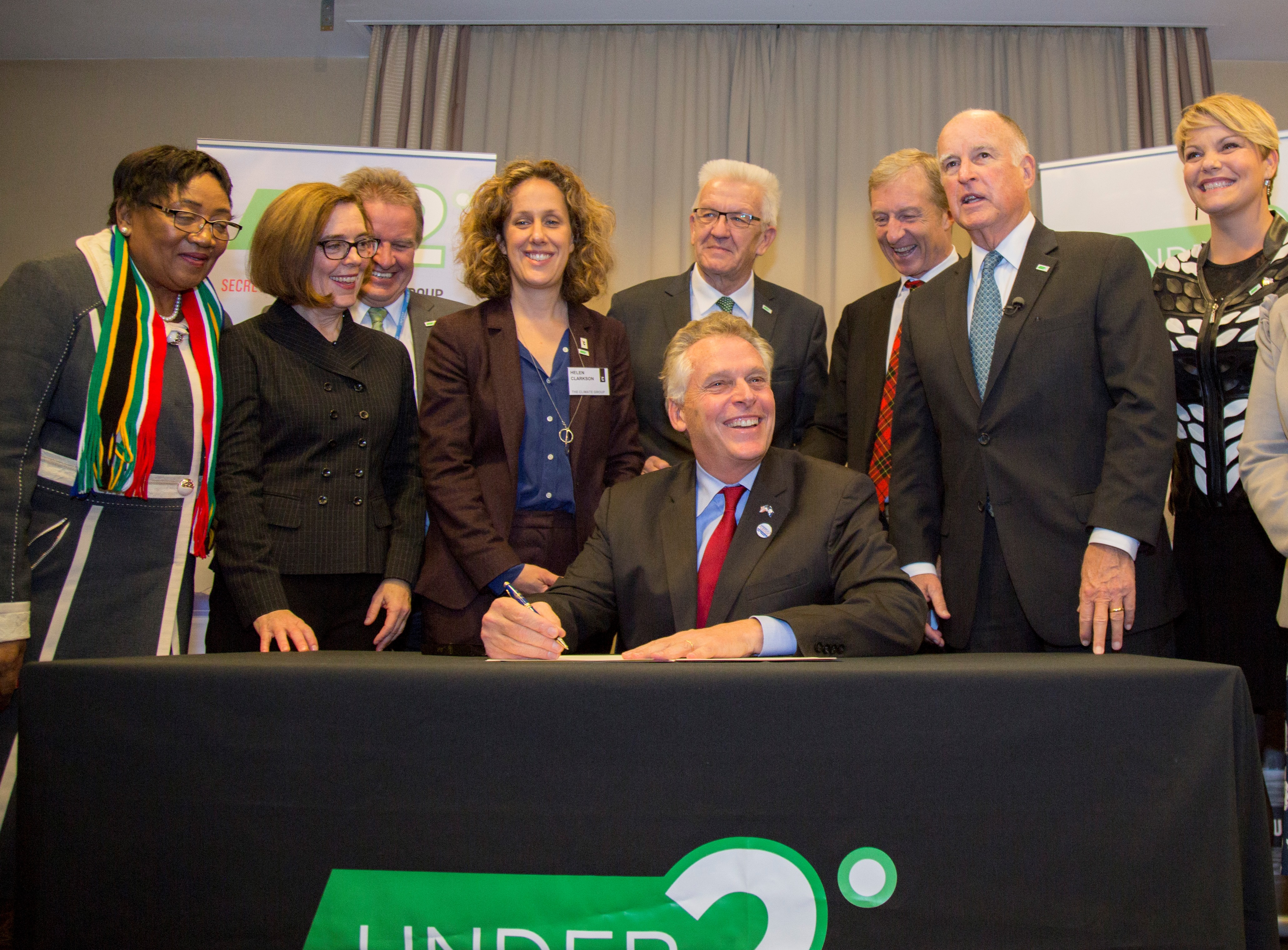 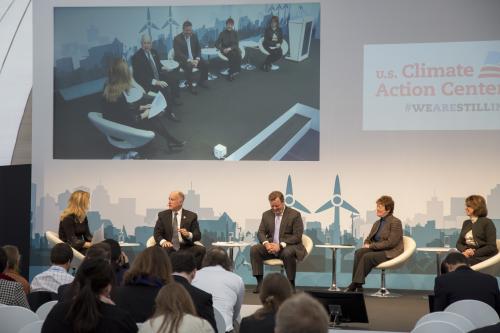 Tomorrow in Bonn, Governor Brown will deliver keynote remarks on local and regional climate action at the opening session of ICLEI's COP23 Climate Summit of Local and Regional Leaders, co-hosted with the City of Bonn and State of North Rhine-Westphalia; join state and regional members of the Under2 Coalition for a panel discussion organized by The Climate Group; deliver a keynote address at a renewable energy event organized by IRENA featuring leaders from the UNFCCC, Fiji, Germany and Deutsche Post DHL; and  give remarks at an event hosted by the United Nations Environment Programme's Climate and Clean Air Coalition recognizing efforts to curb super pollutants.

Over the past week in Brussels, Belgium, Governor Brown delivered opening remarks at a high-level conference on clean energy organized by the European Parliament and European Commission, met with the president of the European Parliament and the European Union's top representatives at COP23, joined members of the European Parliament's top climate and environmental committee and the leaders of the Parliament's political parties for an extensive discussion on opportunities for further collaboration on climate action, and highlighted California's local and global efforts to fight climate change at an event organized by the German Marshall Fund. In Stuttgart, Germany, the Governor also met with Under2 Coalition co-founder Baden- Württemberg's Minister-President and delivered remarks before the state parliament. Last weekend, Governor Brown delivered keynote remarks at a symposium on climate change hosted by the Pontifical Academy of Sciences at the Vatican.