New York City, New York - On the eve of Climate Week NYC 2017, Governor Edmund G. Brown Jr. today welcomed 10 new members – including the Republic of the Marshall Islands – to the global pact of cities, states and countries committed to limiting the increase in global average temperature to below 2 degree Celsius, the level of potentially catastrophic consequences.

“Climate change threatens the very existence of the Marshall Islands and many other places,” said Governor Brown. “Cities, states and countries are joining the Under2 Coalition to curb emissions and prevent a horrible catastrophe.”

The Republic of the Marshall Islands – a convener of the High Ambition Coalition of countries that were instrumental in shaping the Paris Agreement and bringing it into force last year – endorsed the Under2 Coalition today during a meeting between Governor Brown and The Republic’s Minister of Foreign Affairs and Trade John Silk, becoming the 17th nation to join. 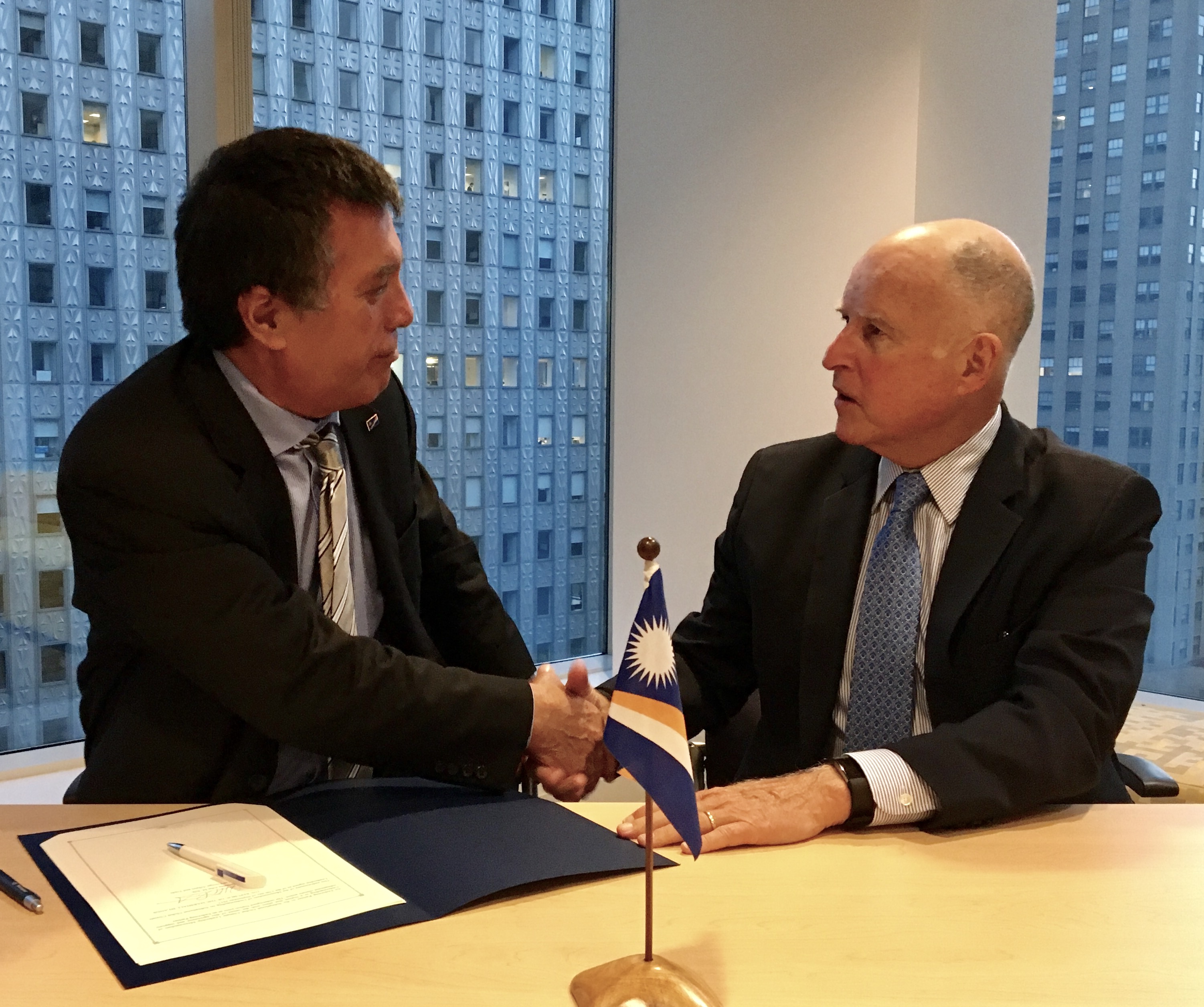 “If we don’t keep global temperature increases below 1.5 degrees, my country will not survive, and no country will be safe. Every country, every company, and every constituency must take ambitious climate action, and it is this groundswell of climate action that the Under2 Coalition is building. We are proud to sign the Under2 MOU as a further demonstration of our determination to lead by example,” said Minister Silk. “California is itself a shining example of climate leadership, and a place many Marshallese have come to call their new Pacific home. The High Ambition Coalition will work closely with Governor Brown in the lead-up to the Climate Action Summit in September next year, including to build a bridge between the Summit and national governments. It is crucial the Summit identifies opportunities to help governments ramp up their nationally determined contributions in time for world leaders to present them at the UN Secretary-General’s Climate Summit in 2019.”

The Governor also announced today that nine other U.S. and international jurisdictions have signed on to the Under2 Coalition: the cities of Atlanta, Boulder, Orlando and Pittsburgh and Montgomery County, Maryland in the U.S.; Queensland, Australia; Quelimane, Mozambique; and the German states of Lower Saxony and Rhineland-Palatinate.

With the addition of these new members, the Under2 Coalition now includes 187 jurisdictions on six continents that collectively represent more than 1.2 billion people and $28.8 trillion GDP - equivalent to over 16 percent of the global population and 39 percent of the global economy. The coalition, formed in 2015 by the states of California and Baden-Württemberg, Germany to mobilize and galvanize bold climate action in the lead up to COP 21, pledges to limit greenhouse gas emissions to 2 tons per capita or 80 to 95 percent below 1990 levels by 2050.

“More and more of the major issues, whether it’s fighting crime and terrorism or whether it’s climate change, are being fought on the local level. I think mayors around the world have recognized we’re now on the front lines on many of the major issues of our day. For this reason we have committed to the Under2 MOU and We Are Still In coalition to show our dedication to climate action. As a result, we will exceed the demands from the Paris agreement and work to reduce our greenhouse gas emissions by 90% compared to 2007 levels by the year 2040. The withdrawal from Paris Climate Agreement puts us, as a nation, out of step with where the rest of the world is headed. That doesn’t mean that the cities can’t pick up the slack,” said Orlando Mayor Buddy Dyer.

“The City of Atlanta is honored to sign the Under2 MOU and join the network of organizations committed to greenhouse gases emissions mitigation. For three consecutive years, the City of Atlanta has led the nation in total commercial property committed to energy and water efficiency through the Atlanta Better Buildings Challenge. Our other sustainability initiatives include the installation of solar panels on municipal buildings, deployment of electric vehicles and charging infrastructure and the creation of an urban agriculture program. We look forward to sharing viable solutions, as well as working with other governmental agencies to learn from their programs geared at creating a healthier, cleaner and greener environment,” said Atlanta Mayor Kasim Reed.

“The City of Pittsburgh is committed to building a more sustainable future for ourselves and our children. Joining the Under2 Coalition provides a global network of peers to help us achieve that goal. We are thrilled to participate in this international community of practice,” said Pittsburgh Mayor William Peduto.

“Local action on climate is more important than ever, and we will continue to work with cities throughout Colorado and the nation to lead on climate. Boulder’s Climate Commitment goals set greenhouse gas reduction targets that exceed those outlined in the Paris Climate Agreement. We are honored to be part of the Under2 Coalition will continue on our path to significantly reduce our city and community emissions,” said Boulder Mayor Suzanne Jones.

“Now, more than ever, jurisdictions need to redouble their efforts to address climate change. We have many forward-thinking and concerned residents and businesses in Montgomery County, Maryland, who understand the urgency of this issue. We are proud to join the growing international coalition seeking to reduce the risks to the environment and the economy from climate change,” said Montgomery County Executive Isiah Leggett.

Tomorrow, Governor Brown will help officially kick off Climate Week NYC 2017 with remarks during the opening ceremony and will discuss subnational climate leadership at the United Nations.