Alexandria, Virginia - New research released by the Federal Voting Assistance Program (FVAP) examines the extent to which absentee voting by (non-military) U.S. citizens living abroad is affected by the level of social connectivity to other U.S. citizens residing in the same country.

Previous voting research indicates that having more social connections (friends and family) is associated with a greater likelihood of voting in-person on Election Day, due to both motivation and information effects.  “Due to the complexities of voting absentee from outside of the United States, it has been unclear how the dynamics of social connectivity apply to Americans living abroad – until now,” FVAP Director Matt Boehmer said. “Thanks to our innovative methodology, we were able to survey this difficult-to-reach population and estimate the relationship between social connectivity and the likelihood of successful voting.  We now know that for these Americans, it's the quality - not quantity - of social connections that increases voting success.”

For U.S. citizens overseas, the process of voting is very different and contains more obstacles than voting domestically.  As such, accurate knowledge and information about the absentee voting process are crucial to voting successfully from overseas.  One way that overseas citizens can obtain absentee voting information is through the transfer of knowledge from other overseas voters.

Key findings from this research: 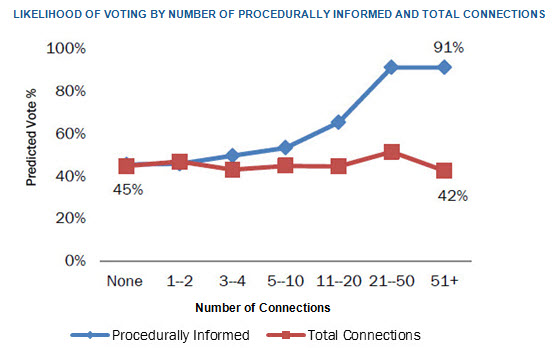 FVAP leveraged these findings for the 2016 election and conducted pilot outreach programs to reach potential voters through their overseas workplaces, specifically overseas affiliates of U.S. owned companies.  FVAP will expand this outreach strategy and develop further targeted information campaigns for overseas voters who can help share key absentee voting information with those in their social networks.